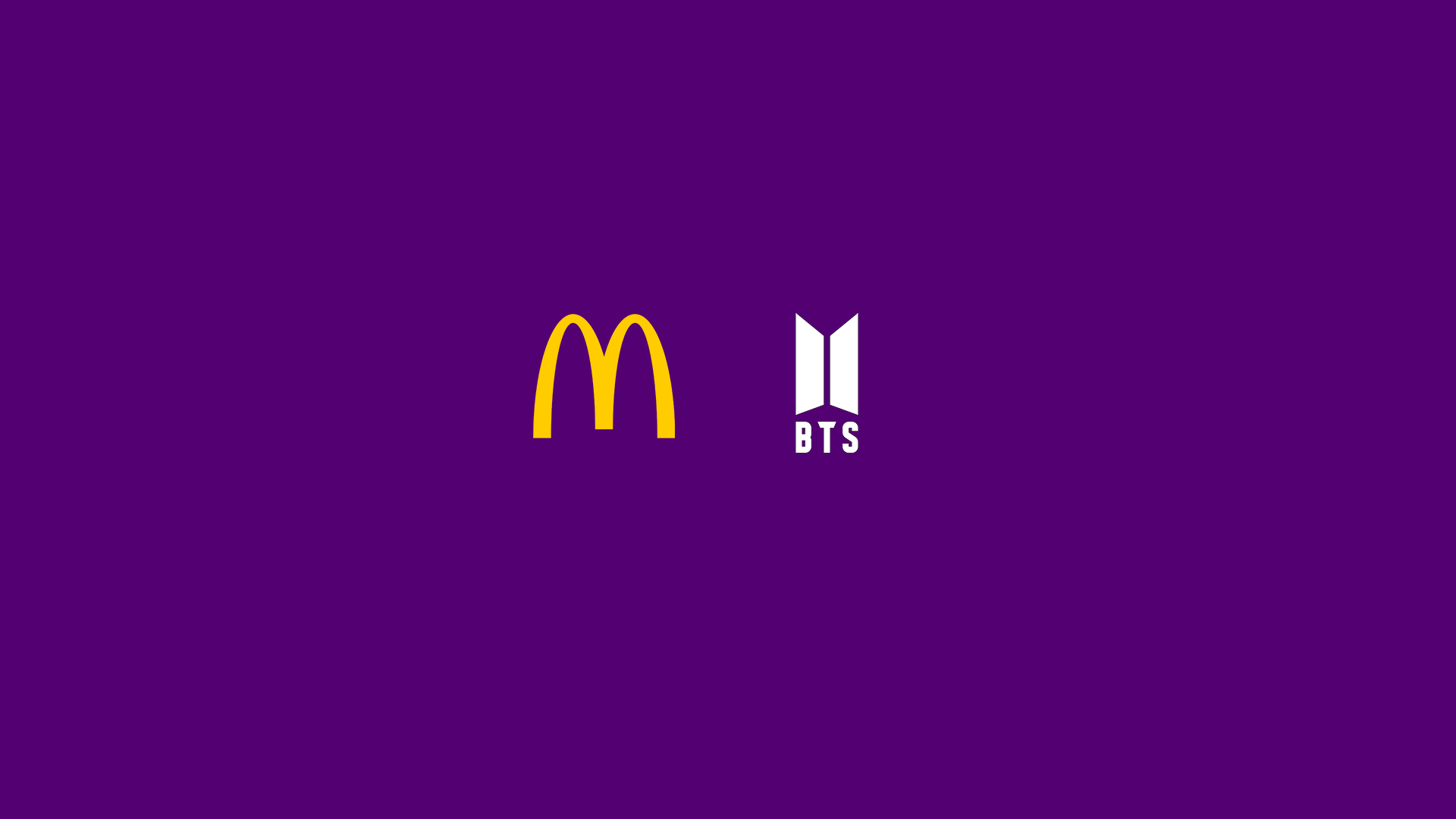 Yes, you’ve read that correctly. Fastfood giant McDonalds and Korean pop band BTS have started a partnership. Every time you think “I’ve seen it all” the Marketing Industry surprises you yet again. So what is this McBTS deal all about? Let’s take a close look at it!

More and more often, we see the most unexpected partnerships arise. In The Netherlands, we saw chips brand Lays pair up with Pizza Hut, Subway and KFC. Earlier this spring, Cola brand Pepsi and Marshmallow brand Peeps announced a collab launching Marshmallow Cola, and in May, English Football League club Ipswich Town announced that singer-songwriter Ed Sheeran will sponsor their tees.

What is a BTS meal?

Starting from May 26th, McDonald’s temporarily offers a new meal on their menu. When buying the ‘BTS Meal’ you receive ten McNuggets, medium french fries, a medium coke, and Cajun and Sweet Chili dippings. The BTS Meal comes in purple packaging.

How the partnership was announced

Coming this May: The BTS Meal pic.twitter.com/iarw2gYMsx

As of writing, it has become clear that McDonald’s and BTS are also launching their own Merch

I love examining these partnerships from a Social Media Perspective. Obviously, the first and foremost reason for launching a partnership is increasing brand awareness and sales. I’m not sure how much the partnership has cost, but I’m sure it has cost a lot.

What’s more interesting to me is the strategy McDonald’s uses to capitalize on the deal.

Obviously, with BTS, McDonalds chose the perfect celebs to partner with. BTS are among the most popular bands on social media and they have an extremely active and loyal fanbase.

So what did McDonalds do?

Let’s get to the beginning: On April 19th, people started speculating after McDonalds published this Tweet. I think this is a very subtle Tweet: In some way, they announce something is coming up soon, but they don’t tell what.

If you scroll through the comments, you see that a lot of people are asking what McDonald’s are referring to.

The announcement is simple, yet very subtle. The french fries are positioned like this so that they represent the BTS Logo. Obviously, all BTS fans will immediately recognize the logo by only looking at the fries. The seven fries also refer to the seven members of the BTS-group. A great example of subliminal advertising.

The announcement was Retweeted more than 250 thousand times and has got more than 600 thousand likes and more than 30K responses. That’s pretty good in terms of engagement…

They even changed their classic red-and-gold logo to the McDonald’s logo with a purple-black gradient. Furthermore, McDonald’s added a ‘7’ to their profile name, referring to the seven group members of BTS.

McDonald’s have transformed all of their social media profiles into ‘BTS Stan’ accounts. And the fans are loving it.

Today marks the start of the collab. McDonalds have changed their logo and Twitter cover to match with the brand of BTS.

They also added a subtle “7” to their name, referring to the 7 members of the group. pic.twitter.com/t8dSXVvs47

And it shows. After the partnership announcement, McDonald’s Twitter profile now gets 30K to 70K followers per week, whereas this used to be 2K to 3K a week. Furthermore, McDonald’s BTS-related Tweets are getting a lot of engagement on average,

These stats are more impressive

The why’s and the buts

Right now, it looks like the McDonald’s x BTS partnership has become a massive success, with a lot of online exposure and many BTS fans willing to buy the meal.

So we shouldn’t forget why the partnership became such a success: As said before, BTS fans are extremely loyal. And we all know how celebrity endorsement works: Once a celebrity likes the product, their fans will like it too.

certain fanbases – and bts is one of these – are known for their loyalty and willingness to get fully behind any (positive) partnership. so this was always going to be a success.

Georgie also makes a great point about the importance of price and accessibility.

it’s also important that the price point of the product doesn’t exclude fans – if you’re asking fans to spend say, $50+, that becomes an expense requiring sacrifice for a majority of your fanbase. and that question of fairness and being valued comes back into play

A McDonald’s meal isn’t that expensive. Plus, the campaign is launched in a lot of countries. This means that the product is 1) not too expensive and 2) available to a lot of BTS fans across the world. Would a BTS meal cost over 50 dollars, or would it only be accessible in South Korea, what would then be the point of the partnership?

It shows how well-thought-out McDonald’s strategy is: They are targeting a specific, very large fanbase, ensuring that the BTS meal is affordable to many. My guess is also that they’ve carefully selected the countries where they would launch this campaign. For instance, the BTS meal is launched in countries like the U.S., Canada and Australia, but the majority of Western-Europe is excluded from the campaign.

However, there is one downside:

A few BTS fans were left disappointed when they ordered the BTS meal: They did get the Medium Fries, the McNuggets and the Medium coke, but they did not get the special purple BTS packaging they were hoping for. And that’s the thing what matters to them; They were only looking for the BTS merch.

So in the end, the only thing they are ordering is a 10-piece Chicken Nuggets meal. They don’t really care about that: They care about the BTS boxes and cups in which the food and beverages are served.

So will this increase in exposure, publicity and sales be a permanent thing? Likely not. Once the McBTS deal ends, we won’t see a lot of BTS Tweets from McDonald’s anymore and the purple packging will disappear. So what does the Magic of McDonalds mean for the BTS fans once the deal has ended? Time will tell. Let’s first enjoy the continuation of this crazy, enjoyable campaign.

What do you think?

What do you think of this interesting campaign? Let’s discuss further