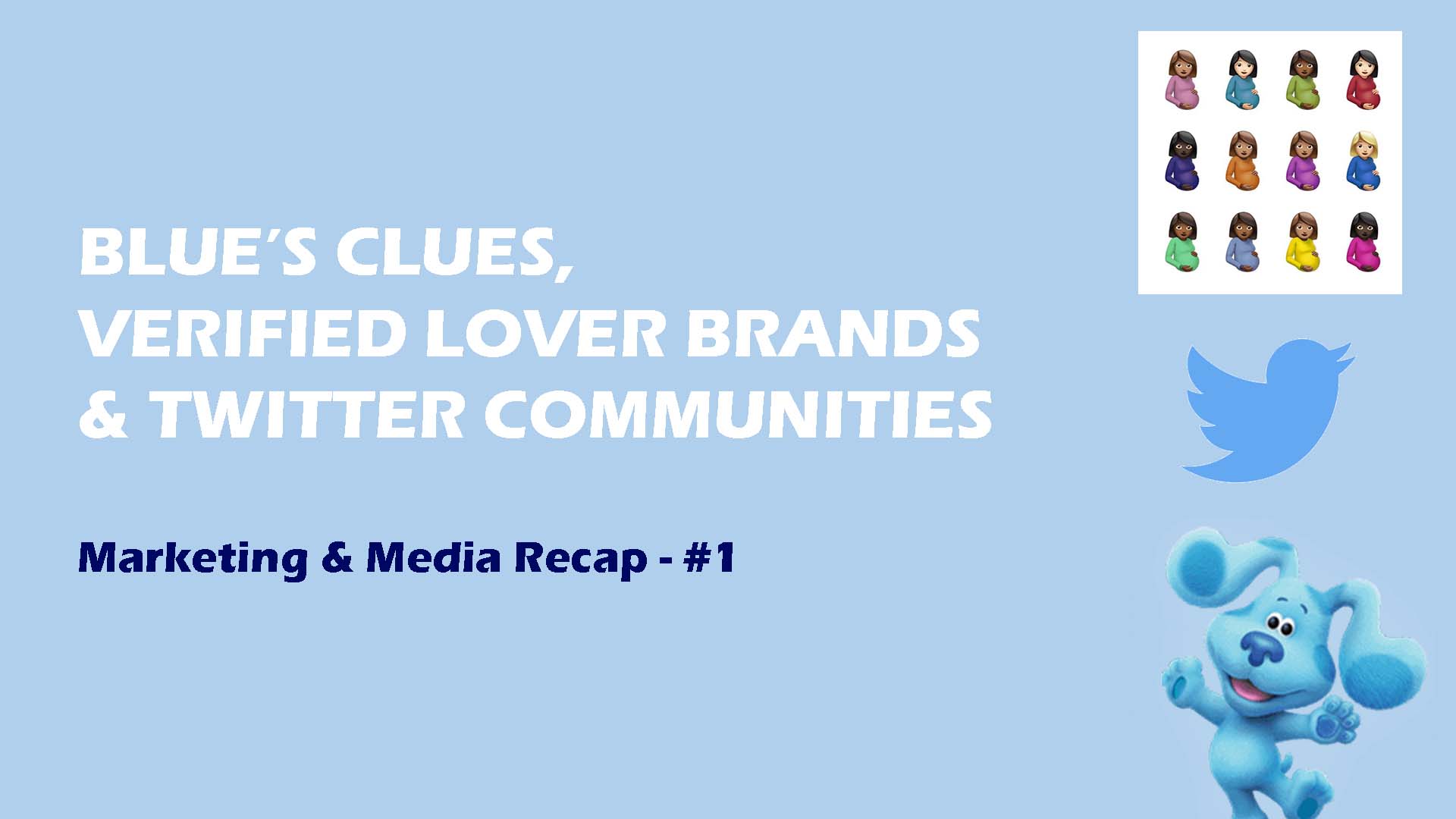 Hi fellow Marketers, it’s Friday! Time to finish your last tasks of the week and to start celebrating your weekend.

Much has happened over the past week. Let’s highlight some interesting Marketing and Media developments with my weekly recap!

Have you ever seen Twitter sitting still and doing nothing? No, me neither! In less than 12 months, they’ve introduced Twitter Fleets (We miss you, Fleets!), Twitter Spaces, and new ways to monetize your Tweets. And now, Twitter are introducing another new feature: Twitter Communities!

Twitter Communities is quite similar to Facebook Groups and Reddit’s Subreddits. With the soon-to-be-launched function, it will be much easier for Twitter users to find, connect and talk with people who have shared hobbies and interests.

Check out Twitter’s comprehensive article about their new function:

Right in the feels: #BluesClues25

They’ve invited the current and former Blue’s Clues hosts to the studio. Together, these hosts made short videos in which they did fun challenges, watched older episodes of the show, and shared how they’ve experienced their time as a Blue’s Clues host.

The #BluesClues25 posts are massively shared on Social Media. And I’ve got a clue why: Relevance and Nostalgia.

By bringing all hosts up to the stage, Nickelodeon made the #BluesClues25 throwbacks relevant to all generations. Most of us remember Steve, the first host of Blue’s Clues. But the most recent Blue’s Clues host, Josh, will be very relevant for the youngest generations.

Nickelodeon showed snippets from the oldest Blue’s Clues episodes and they made a lot of references to 90s and 00s culture. As a result, we all felt nostalgic for our youth. And many of us shared our feelings on Social Media.

I wrote a Twitter thread about Blue’s Clues. Check it out:

About one week ago, Drake launched his new album ‘Certified Lover boy.’ While that album certainly included some good music, people mainly talked about his album cover. Find out why.

So yes, his album cover was a portrait of 12 pregnant emoji. And of course, Corporate Twitter brands couldn’t resist giving their own twist to the album cover!

Check out the Thread I made on Twitter. In this thread, I included some noteworthy examples of brands using the trend.

The creative iterations of Drake’s album gave the participating brands some extra engagement. It shows how you can get publicity when you jump on the trend bandwagon. But there’s one thing you must be aware of: The things you post must still relate to your own brand. So that’s why Pepsi showed their entire range of cola cans on their album, whereas KFC showed their famous red-and-white chicken bucket in different colors.

If Pepsi and KFC published something about Drake’s new album without mentioning their own products, their posts might have given them publicity, but would these posts be relevant to their own brands? I don’t think so.

Takeaway of the week

The temptation to edit while writing is so strong. But try to resist it. Use your writing flow to the fullest and edit at a later moment.

We all want to finish things as quickly as possible. And we think that we can be quicker through multitasking. But quite often, multitasking works counterproductive. The same is true when you try to write and edit at the same moment. If you stop at every grammar or spelling mistake while you write, you constantly obstruct your own writing flow. So write first. And edit when you’re done putting your words on paper.

See you next week!

That concludes the first edition of my weekly Marketing and Media recap! Don’t forget to follow me on LinkedIn and Twitter and see you next week!