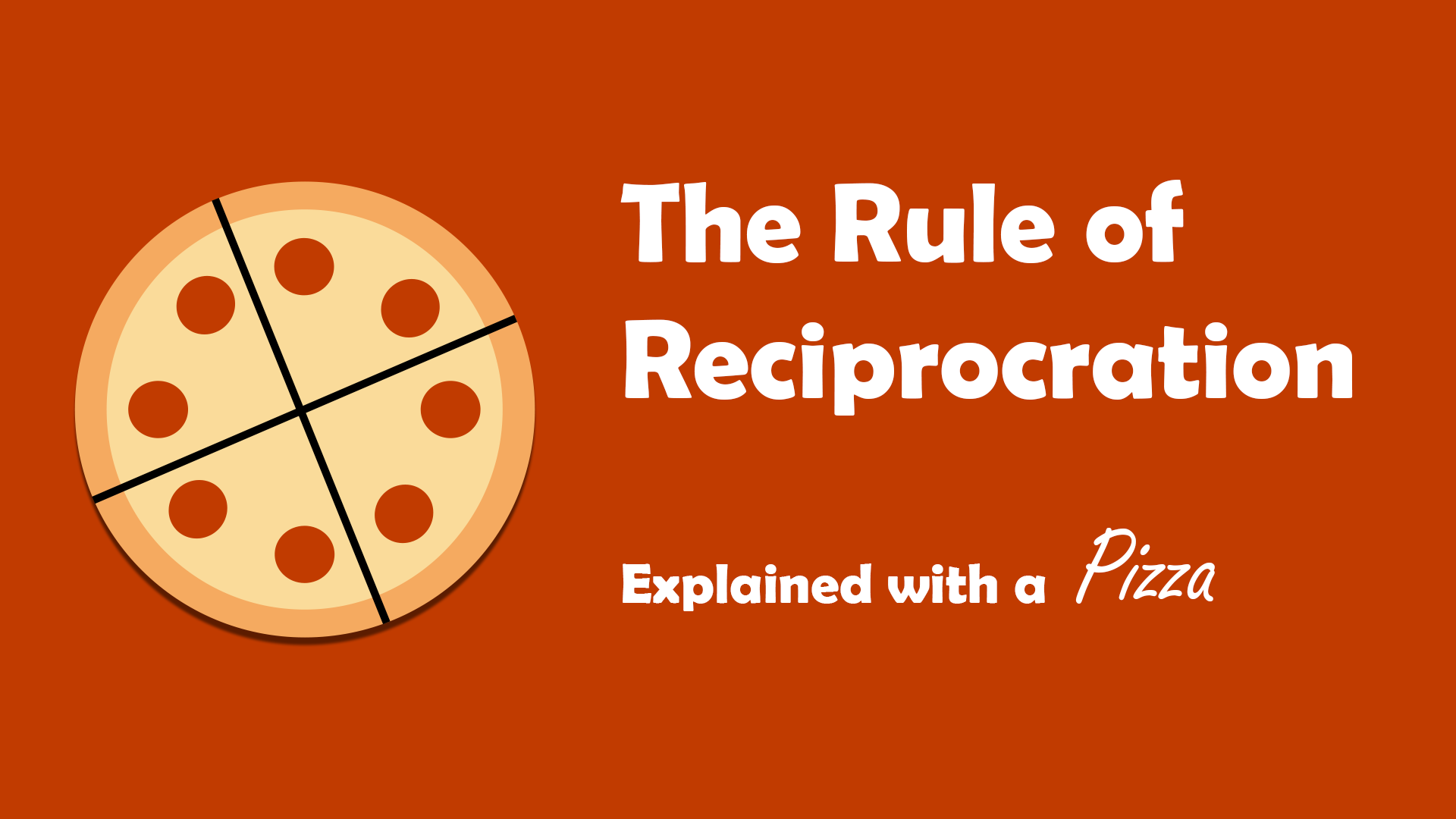 Do you want to hear two interesting examples about Cialdini’s Rule of Reciprocity, or do you want to talk about pizza and pub quizzes? Well, in this blog I’ll talk about both. It’s a weird story, but I’m going to explain how Cialdini’s rule got me a pizza and how it got my aunt and uncle a big box of chocolate.

Each Wednesday, my family and I participate in an online pub quiz. It’s one of the very few fun ‘nights out’ during the COVID-19 period.

The best thing about this Pub quiz? It’s free. You don’t have to pay anything to participate. You can just chime in at any moment by opening a YouTube link. Also, the pub quiz is just for fun, meaning that — cliché warning — ‘Everyone is a winner’ and there are no prizes to be distributed.

Although…You can have a tiny chance at winning something: If you donate a few dollars, you could possibly win a free pizza delivery by Domino’s. Now who doesn’t want that? So a couple of weeks ago, my aunt and uncle donated five bucks to the organization. Later that evening, to our big surprise, they were picked as winners of a free pizza delivery!

We were in awe. We’ve donated a couple of times before, but we would never win something.

So what happened next? My aunt and uncle were deciding when they would order the pizza.

That next Friday. The doorbell rang. My father called. To my huge surprise: it was a pizza. For me. From my aunt and uncle. Delivered by Domino’s

So, what does this all have to do with Cialdini? Yes, you’re probably wondering that too. But let me explain Cialdini’s Rule of Reciprocation first.

In his book ‘Influence: The Psychology of Persuasion,” Cialdini explains how our human brain works, and how you can easily persuade people with this psychological knowledge in mind. He mentions several principles by which people can be persuaded. One of them is the Rule of Reciprocation.

This rule describes our urge to repay people for the value they give to us. This means that when a friend, or even a stranger, gives us something, we tell ourselves we should give them something back in the future.  In the end, our whole economy is based on this: We use money to repay others for the products or services they give to us.

But this value exchange goes beyond buying products with money. Exchanging value means doing one another a favour. Whether that’s a material favour or an immaterial favour — It doesn’t matter.

Let’s use an example: Let’s pretend as if a friend of yours helps you moving your stuff into your new apartment. Your friend doesn’t expect money from you. Your friend just helps you as an act of goodwill. You’re very thankful for your friend’s support. You tell your friend: “If there’s anything I can do for you, call me.” A couple of months later, your friend asks you to help with a very difficult task that starts at 6 in the morning. And you feel the urge to say yes to that task. Because they’ve helped you before. Because what if you say no?

Exchanging value is all about doing each other a favour. And salespersons know that too. They start with doing you a small favour, and then ask you to do a favour in return.

That’s what the Hare Krishna movement did too. Cialdini repeatedly mentions this group in his book. These people live from donations, and thus they would visit busy locations in order to collect money for their organization. And they would use the following tactic:

A Hare Krishna ‘salesperson’ would approach a bystander. They would give these bystanders a flower and ask them to accept the flower as a gift. Then, the Hare Krishna person asks if the bystander could do them a favour in return by donating a small amount of money. Then, as Cialdini notes, many bystanders grab their wallet to give the Hare Krishna movement a few dollars in return.

There you go. A few dollars for just one single flower. The fun thing? In all cases, they don’t force you to donate. You get the flower as a gift. If you said ‘no’ to donating, they would wish you a very nice day.

It’s you who forces yourself to return them a favour. If you don’t, you might start to feel a sense of guilt, as if you have done something socially unacceptable. Whereas you were in no way obliged to donate,

And that’s why a lot of bystanders decide to donate. Even more funny, a lot of them try to avoid receiving the flower as a gift, or try avoiding the Hare Krishna group. Because they know that when they get that flower, they ‘must’ grab their wallet.

Rule of Reciprocation and free events

So let’s go back to the pub quiz and the pizza. Why am I relating these two things to Cialdini’s Rule of Reciprocation?

Remember I told you that the Pub Quiz was free, and that you could win a small prize if you would make a donation? What if I told you that many people make a donation, and the chance to win a pizza is less than 1 percent? I also told you that we had never won any prize before. What’s even the point of donating 5 dollars each time for a small $5,- pizza? You can easily go to a local pizza store and get a pizza for 5 dollars guaranteed.

So that’s how the rule of Reciprocity works. We don’t donate because we want to win that pizza so badly. We donate because we know how much time and effort the organizers have invested into putting the quiz together. To deliver us a free fun Wednesday evening! And whenthey ask us to do them a small favour in return, we’re happy to do so!

From a high-value pizza to a higher value chocolate box

So let’s go back to that Friday Night when I received my pizza from my aunt and uncle. “A nice little gift from us. We hope your pizza tastes well!”

A pizza stuffed with cheese, cream and bacon surely does.

But after having eaten the pizza I felt the need to repay them in some way. So what did I do? A couple days later I decided to send them a box of chocolate. When my aunt and uncle received the box of chocolate, they replied “You shouldn’t have done that, you silly! But we really appreciate it!”

I know I shouldn’t. But I felt the urge to. That’s the Rule of Reciprocation for ‘ya.

There’s one interesting thing about the Rule of Reciprocation. Cialdini argues that the value that is returned often exceeds the value that is given in first instance. So this means that, when someone does you a favour, chances are high that the favour you return to them is higher in value.

And the fun thing? In many cases, these bystanders threw away their flowers, because they didn’t actually need them. The Hare Krishna knew about that, so they went to trash bins to recollect the flowers that had just been thrown away. These flowers could then be reused again to collect donations.

Putting the Rule of Reciprocity in a Marketing perspective

The effectivity of the Reciprocration Rule is acknowledged by many Marketers. It’s used as a mechanism to make other people give you the value you wantIf you analyze social media pages, advertisements and websites thoroughly, you will notice that many online brands are using the Reciprocity principle to their advantage. They’re not just giving you that free product trial, they’re giving you a free trial because they expect you to do them a favour in the very near future..