We spend fortunes to escape home and reality and here’s why: 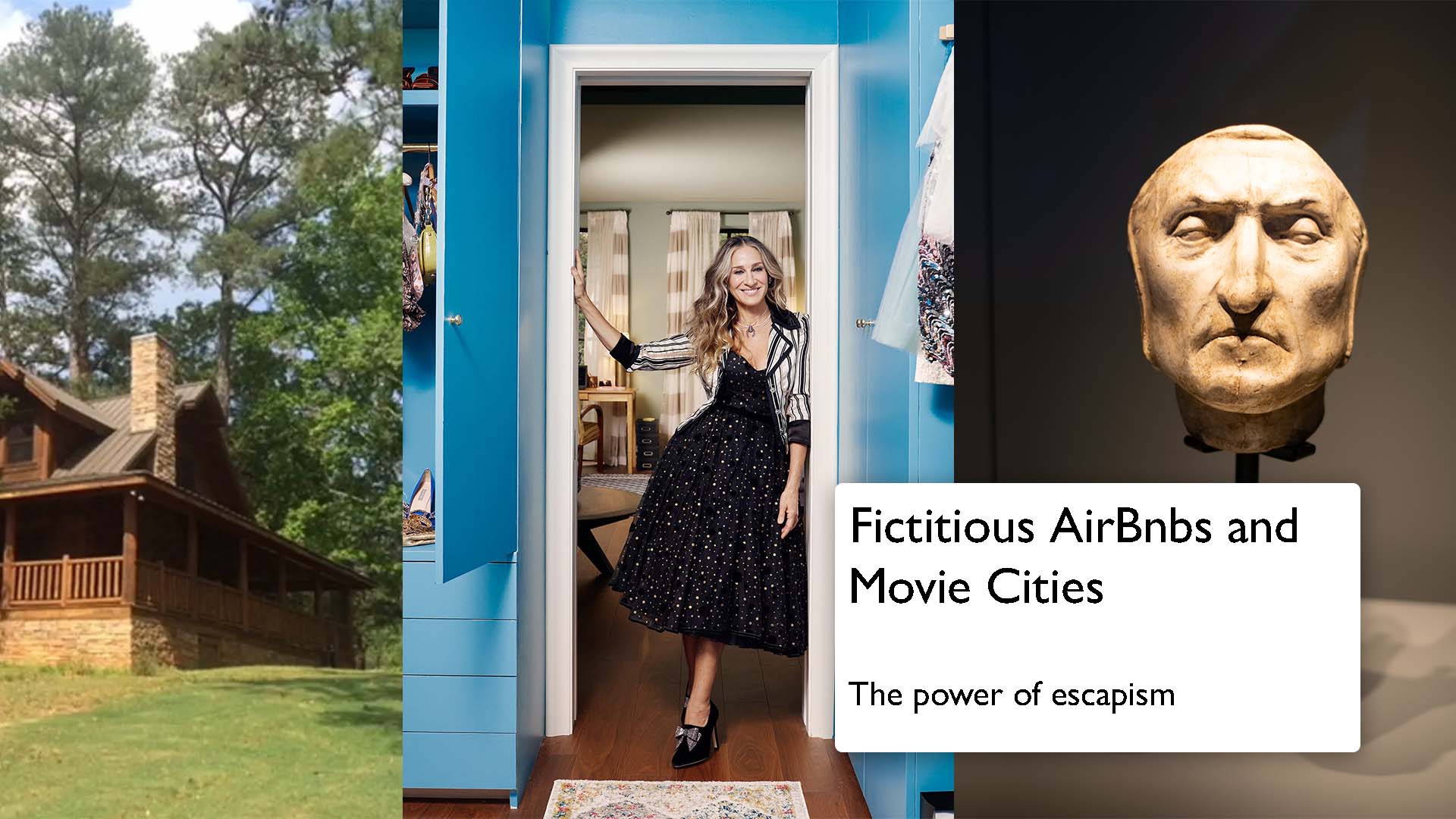 Let’s face it. Our daily lives aren’t always fun. That’s why we escape reality by consuming fictional content (books, movies) or escape our homes by traveling abroad. Or why not both? Anyone fancy spending $800,- to spend a night at an Avengers apartment?

In her weekly #PopChat, friend Brianne (Twitter: @brianne2k) told us that AirBnB will list a Sex And The City replica apartment. They’ve transformed a New York apartment into a replica of Carrie Bradshaw’s apartment, one of the show’s popular characters. Starting from November 8, you can rent this apartment and experience the Sex and the City-life for $23,- a night.

Anne, another Twitter friend (@ayyynne), made us aware of another AirBnb listing: The cabin Tony Stark (Iron Man) stayed at in Avengers: Endgame, before taking on Thanos. You can hire the Airbnb for a whopping $800,- dollars a night. Excluding service fees.

But why do people love booking these apartments when 1) The Sex and the City apartment is just a replica, and 2) The Tony Stark apartment is incredibly expensive? Well, here’s why these destinations are that popular: Escapism. We love escaping from the real world. And the more fictional it gets, the better.

Escapism is the act of temporarily dissociating yourself from the unpleasant reality, by being involved in entertaining activities or by being immersed in an imaginary environment. Acts of escapism include, but are not limited to:

When performing ‘escapist’ activities, we ignore, evade or avoid reality for a short while in order to avoid distress and psychological harm, says Dr. Carla Marie Manly in this wonderful article. She adds that a nearly fictional experience increases the quality of the escapist activity.

And in this article we’re focusing on two activities of escapism. First of all, movies, books and TV-series entertain us because we’re immersed in a story and universe that is different from reality. That different universe excites us, inspires us and emotes us.

Second, we love traveling because to escape from our boring home, home town or home country. While we are away from home, we’re faced with exciting challenges: Discovering a new cultures, using a foreign language, making new friends and figuring out how to get from A to B.

In the case of the ‘Endgame’ and Sex and the City AirBnb’s, it seems like fans who rent these apartments, combine two different escapists activities. First, they escape their hometown by traveling to another city or country. Second, they escape ‘reality’ by living Carrie Bradshaw’s SATC life or by going to the Marvel Universe.

Traveling to a fictional world

If I interpret Dr. Carla Marie Manly’s words right, it seems that the more immersed we are into the fictional world, the better we experience that world. So let’s get back to the Sex And The City and the Avengers: Endgame-apartments.

Why do they work? I don’t have any academic evidence to back up my assumption. However, I assume that these two AirBnb apartments are popular, because they are recreations of fictional worlds that are admired by massive fanbases.

To escape from reality, these fans want to relive the stories they’ve seen. They want to be part of these stories. They want that Sex and The City or Avenger experience. Even when the apartment is just a replica of the building used in the movie.

As Hannah Waye (@hannah_waye) puts it beautifully: “So much love for these shows and characters is based in the worlds they live in – who wouldn’t pass up the chance to be a part of their world?”

And that’s why we travel to realistic fictional worlds. Don’t just think of the two examples I just gave. What about Disney World? Who doesn’t love meeting up with Mickey Mouse and ‘real’ princesses?  We don’t only go to amusement parks like Disney World because we love thrill rides like Space Mountain. it’s also because of the fantasy world, the fairy tales that become real. As Hannah Grubow (@HannaGrubow) puts it: We create something tangible out of something that isn’t.

Shall we look at some more examples? Let’s start with Verona: Do you recall why so many people go to Verona? Right, because of Shakespeare’s Romeo and Juliet! Is that story even true? Well, Romeo and Juliet did exist, but there is no evidence showing that this tragic love story is actually true. And yet we go to Verona to see that street, that balcony. To relive the story that is told by Shakespeare.

And why do we travel to Florence, Edinburgh and Matamata, New Zealand? Well, read on, because I’m going to give you some examples!

Last month I travelled to Florence. The city known for its richness, majesty and art thanks to the Medici-family and artists like Michelangelo, Da Vinci and Botticelli. But do you know what Florence also is known for? Dan Brown’s book (and movie) Inferno!

In Inferno, a British professor wakes up in Florence. He is chased by the World Health Organization, because he presumably carried a deadly virus (how ironic). But the professor first wanted to figure out why the WHO were after him. He escaped Florence. He went to the Palazzo Vecchio, opened a hidden door, climbed the rooftop, and found a secret hallway of the Ponte Vecchio.

Why am I all telling you this? Well, many people loved Dan Brown’s Inferno. Many want to relive the story themselves: Florence even offers Inferno Walking Tours. You can relive the professor’s escape, that brings you to monuments like the Boboli Gardens, Palazzo Pitti, the Palazzo Vecchio, the Ponte Vecchio and the Duomo.

The friend I was traveling with was one of these Dan Brown fans. He was excited to relive that Inferno-story. I wasn’t that excited yet, but agreed that we would watch the movie Inferno beforehand.

After watching that movie, I could understand the hype. When I was in Florence, I didn’t only admire the city’s luxury and art, but I also looked for artefacts that appeared in the movie: Dante’s Cerca Trova, his mask, and the doors to hidden pathways (my friend actually tried to open one — the museums staff didn’t like that).

So yes, Florence obviously is the city of art and prosperity. But those who’ve read or watched inferno might experience the city in a completely different way.

So Rowling didn’t even entirely write the series in Edinburgh, the Harry Potter Universe is fictional, the Hogwarts castle that was used in the movies isn’t even located in Scotland and yet people still go to Edinburgh because of Harry Potter.

Why? It’s because the city feels wizard-y! And yes, Rowling did occasionally write her books while she was in Edinburgh. And maybe she was inspired by the Scottish Architecture. So Harry Potter fans feel like that city best describes the vibes of Harry Potter. And I kid you not: Edinburgh organizes Harry Potter tours too.

There are also many people who travel to Matamata, New Zeeland. Why? Is it because of its history, its nature, its culture? Maybe. But in Matamata, you’ll also find the Hobbit Houses from the Lord Of The Rings-movie. And many LOTR-fans who travel to New Zealand must have seen these houses. Why? It’s because they’re huge fans of the trilogy. And they just want to be part of that fantasy world for a little while.

Let me be honest with you: I went to “Harry Potter”-city Edinburgh and “Inferno” city Florence. I didn’t really read or watch Harry Potter, and I hadn’t watched Inferno before. When going to Edinburgh, I just admired the Medieval, historic vibe. But when I was in Florence, and after I had watched Inferno, I did look for Dante’s quote ‘Cerca Trova’, and I viewed the city from a slightly different perspective than I normally would.

In that case, traveling to fictional destinations that ‘exist’ in real life, can certainly add a new layer to your traveling experiences: Not only are you traveling to another place, you’re also traveling to a fictional world that you like. You shortly escape your home and reality at the same time.

I’m Jelle Postma, a Junior Marketer from the Netherlands. I love learning more about Online Marketing, Consumer Behaviour and Creativity so that’s why I consume, write and share on Twitter (link to my profile) and LinkedIn (link to my profile). I also regularly write blogs on my personal website.

If you want to hire me or work with me, let’s connect!